Delusion of the Fury

Director Heiner Goebbels returns to Lincoln Center to present his staging of rebellious California composer and iconic outsider Harry Partch’s final large-scale work. Populated by the rich sounds of Partch’s original instruments, Goebbels’s interpretation of Delusion of the Fury weaves the maverick composer’s idiosyncratic score with lighting, movement, and song into a spectacular sound realm of lightness and humor that can only be described as otherworldly.

The superb musicians of Ensemble Musikfabrik (who brought Karlheinz Stockhausen’s Michaels Reise um die Erde to vibrant life for Lincoln Center Festival 2013) make use of a fantastical array of painstakingly reconstructed Partch instruments to realize the eccentric pioneer’s series of soundscapes which improbably blend a Japanese ghost story with an Ethiopian myth.

“It was the sheer exotic beauty of it all that was so beguiling— music that seemed totally unclassifiable but which was performed with coruscating brilliance, combined with a ravishing, mysteriously magical staging.”—Guardian (U.K.)

“Simply sensational: the audience was nearly blown over by Partch's music.”—Die Zeit

Events related to Delusion of the Fury

The Staging of Delusion of the Fury 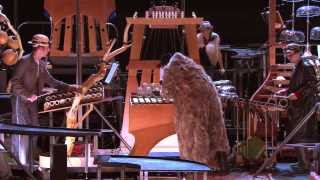 Produced by Ruhrtriennale – Festival of the Arts. In co-production with Lincoln Center Festival New York, Ensemble Musikfabrik, and the Holland Festival.

Supported by the German Federal Cultural Foundation and the Arts Foundation of North Rhine-Westphalia.

Ruhrtriennale and Ensemble Musikfabrik are supported by the state of North Rhine-Westphalia.

The Lincoln Center Festival 2015 presentation of Delusion of the Fury is made possible in part by generous support from The Andrew W. Mellon Foundation and the Arts Foundation of North Rhine-Westphalia.

In collaboration with, and the generous support of the Goethe-Institut and the Federal Foreign Office of Germany

For questions about accessibility or to request an accommodation, please contact [email protected] or 212.875.5375.